My Mother : Birth, Marriage and Death


When she was married to my father, Chong Toong Choong, on 28 May 1938, she had just turned seventeen. How pretty my mother looked as seen in the photos below: 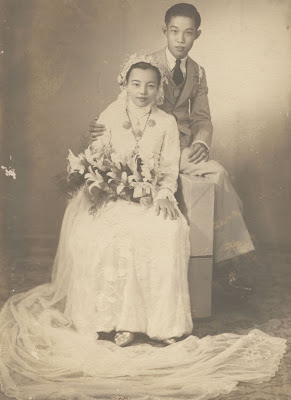 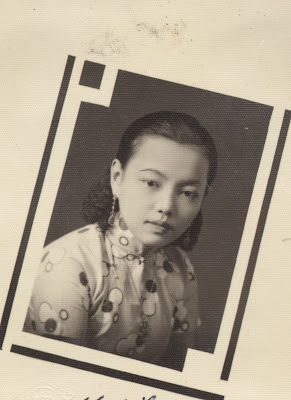 She became the mother of 7 children and I was to be born as the last child in the family. The first photo below shows the family on my 1st month or full moon from birth. Only my oldest sister living with grandma in Penang was not present. The second photo below was taken when I was about a year old. 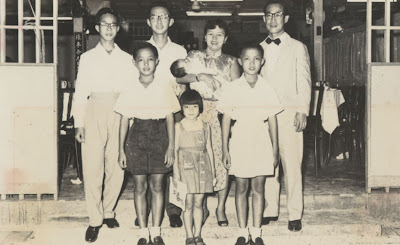 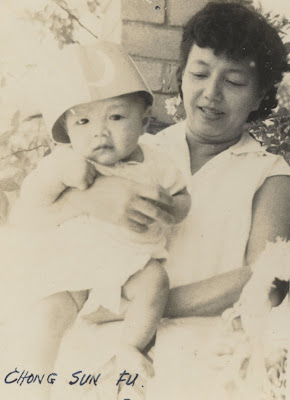 I grew up remembering that my mother was always there for me. From the cradle to the early days of schooling up to my pre-university year, she had always cared for me. She was there at the airport on the day I flew to Australia to begin my university years and she also came to visit me in Australia. When I came home, she was still there for me. That was what my mother meant to me, being there always for me. 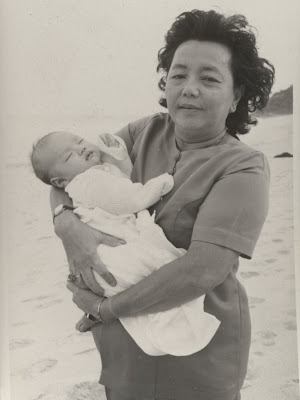 
(Post-dated development on 11 Feb 2019: I received an online WhatsApp message from my 3rd sister-in-law that the above photo is not me but her oldest son Woon Kean. Perfect timing for her assistance to me as I'm writing a post on this date about Synchronicity and her message is totally relevant to the topic. To know why click here to read that future post, a time travel exercise indeed!) 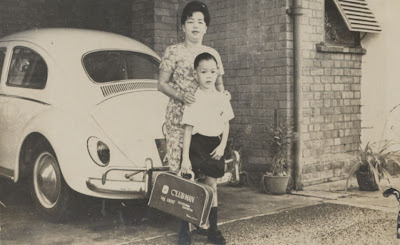 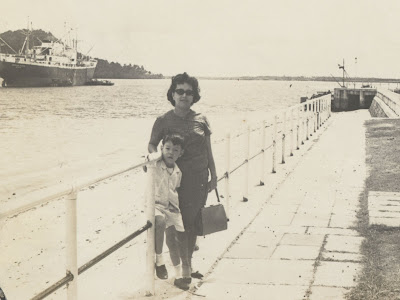 Through the years of growing up. 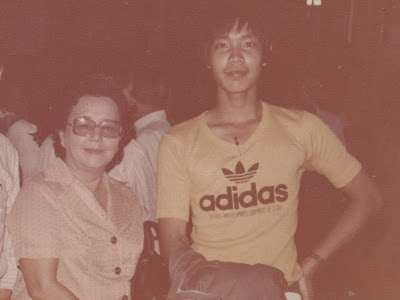 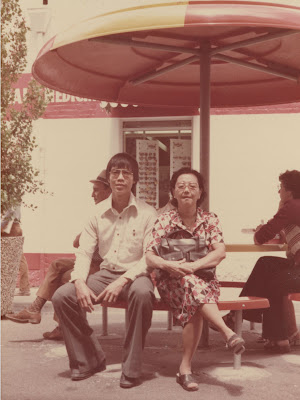 She would still pay me a visit there 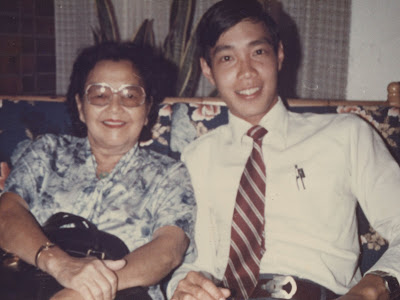 ....and waited for me till I came home once more!

However, though I had come home after finishing my education, I soon had to be away from home again. Having been called to serve on a voluntary mission for the Church on 6 Aug 1980, I had to leave home again for the duration of 2 years. I had great concern for my mother as she was already deteriorating in her health due to diabetes which she had contracted at my birth.
I was glad she survived throughout my entire mission, as this was my greatest concern prior to embarking on my mission when I had to face my family. (Read the details here) 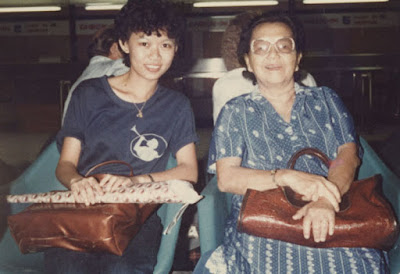 She even got to meet someone I was attracted to in Singapore after my mission who came to Kuala Lumpur to join me in some single adult church activities. Geok Lee would later fly over to meet my mother with her father when our relationship seemed to be set for the long term.
My after mission time was spent mainly with my mother. One morning in the month of Sept 1982, I woke up from a nightmare in the home where I was staying with my mother at 25, Jalan 20/22, Petaling Jaya. I had an awful dream that my mom had passed away and when I woke up, I immediately came out of my room to look for her and was relieved to find her still there very much alive and well.

I now refer to an excerpt from my personal handwritten journal dated Friday 22nd Oct 1982 :
"Today is the gloomiest day of my life. I got out of bed at about 7.30am and when I walked into the living room, I sensed something was wrong. The wooden door was still shut and I immediately rushed into my mother's room to find her lying at the end of her bed, stiff. I touched her and knew she was gone. My first words were, 'Oh Mother, My Dear Mother!' and just caressed her body. Then I laid my hands upon her head and gave her a priesthood blessing that she may find her way safely into Our Heavenly Father's arms."

A funeral service followed at the same home the next day where family members, relatives, and friends came from near and far numbering about 150 people. About 30 wreaths of flowers came from various people. The following is an excerpt from the same handwritten journal :
"Just after 2pm, the funeral van rolled in and we began the journey to my mother's burial ground. Six of us, consisting of my father, brothers, my eldest brother-in-law and I were the ones to carry the coffin. We knelt around the coffin and I offered a family prayer before we lifted up the coffin and slowly walked towards the van. We walked for a short distance to the end of our front street and then got into our cars to drive to the grave site at Len Sen Gardens, only about a mile and a half from our house.

There we carried the coffin from the van to the plot (P589) that was already prepared by the undertakers. A short grave site service by our church started with an opening prayer by Anthony Lim who said it in tears. Ivan Hoe then gave a short talk for about 5 minutes followed by Sister Jephson who sang a solo hymn entitled 'I know My Redeemer Lives'.

Then the grave was dedicated by President Jack as I had requested earlier. The coffin was then lowered into the ground and at that instance, my eldest brother sank into his knees in tears and my other brothers followed suit. Only my father and I were standing and after adjusting the coffin's position as directed by my father, the earth was slowly moved to cover it. Each one of us took some earth in our hands and tossed it over the coffin for the one last time. Soon the coffin was completely buried and all the flowers were placed over it.

The crowd began to disperse just when raindrops began to fall. What perfect timing." 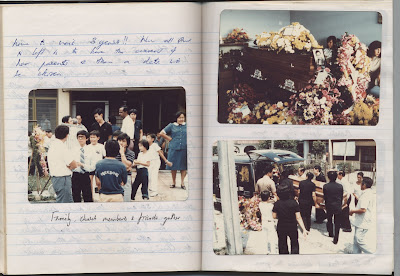 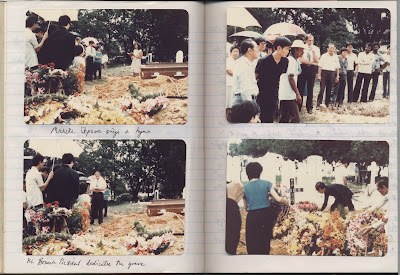 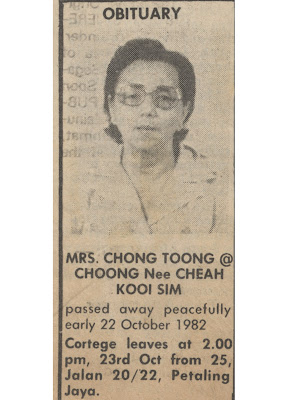 A marble headstone was soon added for my Mom's gravesite and I had the words etched on it that she frequently repeated,  "God is Great, Time will Tell."

I am so glad she accepted the restored gospel while she was still alive. I will never forget those simple words that she had taught me long before she joined the Church after I came home from Australia, just prior to my mission call. It's etched on her tombstone:


"God is Great, Time Will Tell" 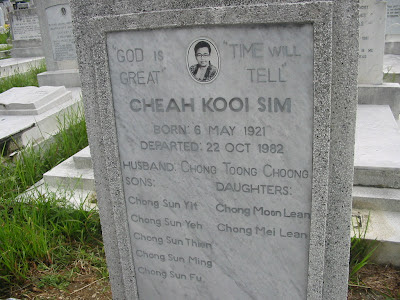 
Click here for Google Map location of the Christian Cemetery 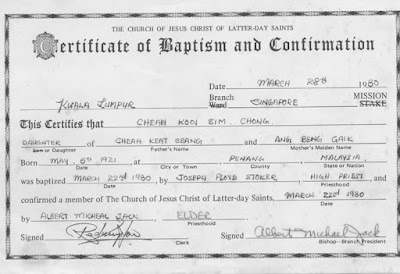 She was baptized on 22 Mar 1980 by Joseph Floyd Stoker and confirmed by Albert Michael Jack on the same day in the Kuala Lumpur branch. 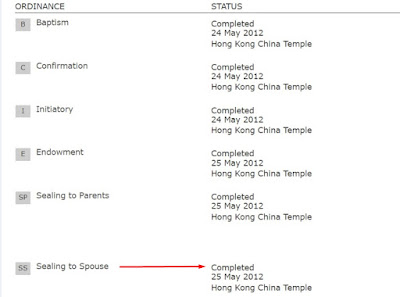 She was sealed to my father Chong Toong Choong on 25 May 2012 in the Hong Kong China Temple after completing all the proxy ordinances as listed above for him. This was done in a trip where Geok Lee and I accompanied our oldest son Woon Han to the Hong Kong temple for his own personal endowments in preparation to serve his mission in Manchester UK.