I never really dated before or simply asked a girl out because I was interested in her. It was always a dance at the University that caused me to 'casually' invite someone to be my partner as I needed one then. Now it was different and I really like to know this girl better but there was no official dance to invite her to. From the pigged tail school girl I knew before my mission in a group single adult activity, her charming face was noticed again on the Church notice board at Bukit Timah Road in a choir photograph.

I now got her phone number as explained in a previous post. I must have prayed for days wondering how I could make a 'casual' approach as I had previously done so with 'dates' but this time it seemed so much more difficult! As I was painting the house and after many days of thinking & imagination, the perfect idea came. I had learnt that she was a close friend of Jon Lim and his wife Doreen. Jon Lim had taught her how to play the piano as a young woman and she was active in the choir who was led by the them. Now I had learnt that Jon Lim was an architect who built his own home with a unique design so the perfect idea was to request her bring me to their home!

I found my way down south to Singapore and I remember vividly going to a public phone booth to make that call which I must have rehearsed a thousand times in my mind. Since I haven't seen her for a few months from the time I was a guest at her home with my missionary companion, I wasn't sure if she could remember me when I identified myself but fortunately she did. Well I casually mentioned my interest in visiting Jon Lim's home and for the next few minutes she took the time in giving me directions how to get there!!! She went on and on and of course I wasn't paying any attention but was just in a panic what to do next as I didn't quite exactly ask the right question! When she finised, I just uttered the words to say that it sounded pretty confusing and with a deep breath, asked her if she could take me there and that I would pick her up at her home as I was driving a car. To my relief she responded with a 'Yes' and from that point onwards, everything went on smoothly. Our first date was therefore at home of Jon and Doreen Lim on 12th June 1982.

We later joined the Single Adults in a night out to Sentosa island and I believed the group noticed that we were pairing off especially when I would be the one riding in the ferris wheel in the same carriage with her. When I got back home to KL, I began to write a 'special' letter to her. I guess I've always been better writing down the feelings of my heart than expressing it verbally so the letter contained my inner most desires and I believe it was a very frank letter expressing my interest in her, to want to know her much better and to give her an opportunity to get to know me as well.

Did I say everything went on smoothly? Well yes and no. Well I posted my mail to her and I was waiting for many anxious days for a response. Imagine that there was no internet in those days and though there was the telephone,I had felt it was too early to just call her and talk to her. I guess I didn't have the guts to express my feelings for her verbally yet and wasn't sure if she was interested in me and the contents of my letter was to clarify all that. I had preferred to wait till she had learnt of my feelings first which I had expressed in the letter and observe her response from there before I proceeded further ahead with the courtship. Well I waited and waited for the 'signal' to come but all was quiet. Then one day, another Singapore girl came to visit the branch and her name was Jessie Ho, a friend of Geok Lee. She came up to me confidentially and asked me if I had received Geok Lee's mail and I responded that I didn't. I expressed that I had also written a letter to her. Some how, our mails must have crossed each other as I think she had sent off a letter as I was sending mine but hers never arrived! I was relieved to hear through Jessie that she was interested in me or was at least following up with me and from that point onwards, it was 'full steam ahead' in our courtship.

Distance and time was a big problem in our courtship and we had begun our frequent long distance telephone conversations. Her first trip to KL was on Friday 2nd July 1982. She stayed the weekend with my mother and we joined the single adults group in KL for a swim at Mimaland on Saturday. It was fast Sunday the next day at Church and I bore my testimony followed by Geok Lee upon my urging! We had time to pay a visit to my 4th brother to have dinner with him before dropping her to the airport to return home.

We had planned that she would return back to KL on the 17th of the month for an all round Malaysia trip. She arrived with her father in the early morning of the 17th. We brought him to visit the nearby Genting Highlands and later brought him back to the airport by night to return to Singapore. In a way her father transferred the custody of his daughter to my mother who accompanied us in our journey with an old friend of hers. The four of us left KL for the island of Penang on Monday 19th July where I would follow up on my genealogical search (to be covered in another post. ) After a few days in Penang, we planned to be one of the first cars to cross the new east west highway that had recently opened just south of the Thai border. We made it to the East Coast cities of Kota Bahru to reach my third brother's home in Kuantan. Our journey would end in Singapore to deliver her back safely to her parents home at Queenstown.

Much was learnt about each other during the trip. In my frank and sometimes awkward mannerism, I told her very early in our 'journey' that I wanted her to know everything about me, meaning my strengths and my weaknesses and that I didn't want to pretend to be someone I was not. I didn't want to have a courtship where in my mind, many couples were just acting it out to be their best. I gave her my personal journals to read so she could know of my inner thoughts and feelings of life.We found out that we were both coincidentally the youngest of 7 children in our family. I discovered her talents and interests in art, design and music, the very things that I lacked, but the thing that impressed me most about her was that she was always smiling, laughing about things and had a general happy disposition. She used to wear bermudas often and whenever she would ask me later in life what attracted me most to her, I would jokingly answer that it was her 'cute' knees!

I still love her cute knees to this date and I can honestly say that everything about her that I loved then I still love today. Most of all, I love her as the companion and soul mate who would stick with me through our long journey in life together, through unavoidable sickness and pain, through happy times and sad times. We have had and will continue to have many happy times together and this makes riding through the rough patches of life so much easier. The last sentence of the writings of Robert Fulghum which hangs in my office wall entitled, 'All I really need to know, I learned in Kindergarten' rings in my ear. It reads, "And it is still true, no matter how old you are - if you go out into to the world, it is best to hold hands and stick together." 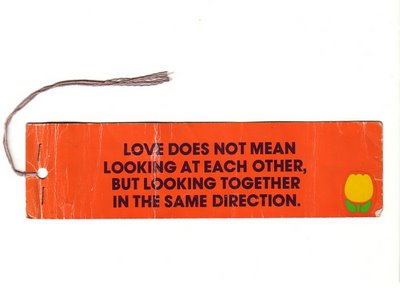 One of the first little gifts I received from the Singapore Girl that I have kept to this day, a meaningful bookmark. 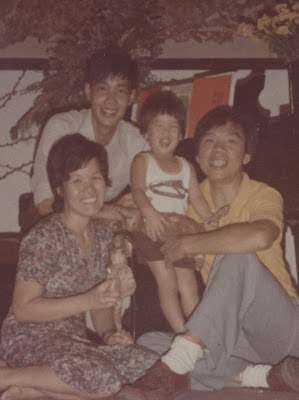 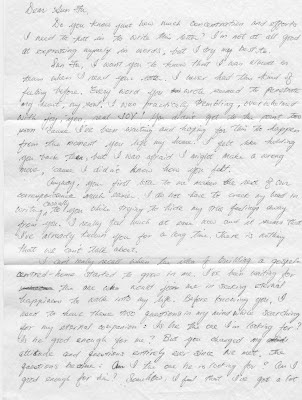 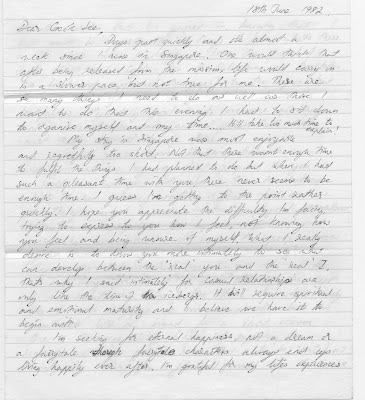 Here are the links to Geok Lee's version found in her own blog referred to in her comments below:
Retro 1
Retro 2
Posted by Dad the KL city kid

My version are recorded in my blog. Check them out!

Thanks for featuring me here =)

You are most welcome!

Me romantic? Yours better la!
I enjoyed reading your version especially the physiological account of your experience meeting me for the first time hahaha Go read my comment for retro #1.