Following up on the Search for my Genealogy

The round peninsular trip by car planned with my first date and my wife-to-be, Geok Lee, accompanied by my mother and her friend, started on Monday 19th July 1982 from Kuala Lumpur. We would drive to Penang Island to spend a few days there and then head on to the east coast via the new East West Highway to the town of Kota Bahru. From there we would head on to Kuantan to visit with my brother and wife for another few days. We would leave to Singapore on Sunday 25th July so that Geok Lee could return home.

On this trip, I had planned to follow-up on finding the key person with more information of my roots from the article in the newspapers that my father had earlier shared with me during my mission.

The following is an extract of my hand written journal dated Wed 21st July 1982 of my experience in searching for my Genealogy :

"In the morning, I went to check the address given to me of Queeny Chang, the author of the Book, 'Memories of a Nonya'. We found the house but the man said she had shifted to another with the address 500, Jalan Pakarwari, off Jalan Gajah. We later found this was not the complete address. We found  Jalan Bunga Bakawali but there were many houses with the number 500 ie 500A, 500B, 500C etc. Feeling inspired, I walked to the first house at the top of the road and I found the house next to it had its doors open with a picture of Chong A Fie, my Great-grandfather's brother. I learnt from Queeny's sister-in-law, Mrs Chong Ken Liong that she was in Singapore and I was given two telephone numbers."

The following is my journal on Monday 26th July :

"Just after lunch, I had a most interesting conversation with Mdm Queeny Chang whom I've been longing to meet for quite some time now. She is about 86 years old and had recently suffered from stroke. Although she was weak, she was quite attentive and could answer the many questions I had put forth to aid my genealogical research. She is actually from Medan but because of her stroke, she is unable to travel home & now lives with her grand daughter-in-law in Toa Payoh Lorong 6. I found out that there is a generation book of our family kept in Medan by my grandfather's eldest brother's family. I need to write to them to seek a copy of this valuable book. I took some pictures before leaving and as Queeny wanted to meet my mother, I told her I'll come back to visit her again with my mother."

I did pick my mother to visit Queeny Chang in the afternoon of the next day. 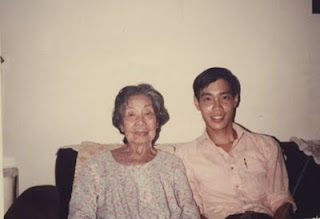 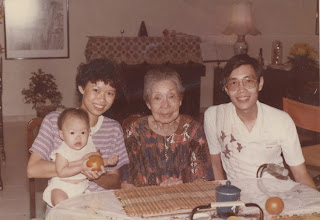 Years after when we had our first child Fei in 1984, we visited Queeny Chang again. The amazing stories of our follow-up in later years from these early meetings are found in a future post here.

Post-dated Event
Trip to Penang in July 2018
To follow up with the relations of Queen Chang first found in the journal stories above. 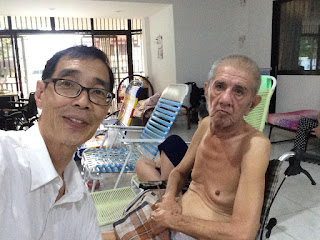 This is a mystical medium named Mr Ooi who learned a lot from my grandmother Cheah Suan Kee, my grandmother of my father's side who was the wife of Tjong Kung We, 2nd son of Tjong Yong Hian with a family tree found at the bottom of this post.  His powers are recognized by my oldest sister who lives in Penang who was raised by my grandmother and even by people related to Tjong A Fie family servants whom he claims visit him in Penang quite often to have their fortunes read!

This visit to Penang has some strange mystical occurrences which will need more time to follow up to share what had occurred! Click here to read some ongoing mystical stories.