As we became more proefficient in teaching and finding people to teach, we began to feel that the public transportation we were depending on in KL was slowing our work down. Hours were spent waiting for a bus and though night time was the best time to find someone home to teach, due to the fact that we had to be home by 10pm under mission rules, we could only effectively visit one home only per night. On one particular night, while waiting a long time for a bus to come, I had expressed to my companion how nice it would be to have a car in which he simply replied, if it is the Lord’s will, we will have it. Quite amazingly again, within a few days I suddenly got a call from someone I had least expected would call and that was my Father! He was brief and called to say he had a spare car he could lend to us and asked me if I would want it! My first feeling was that his call was an answer to my nightly prayers to soften my Father’s heart towards my mission. I told him that I had to consult my Mission President and gave me 2 days to come back to him.

We did get authorization to have a car and from that moment, our work was accelerated but not without incidents to be remembered for the rest of our lives! One of the first thing is that our landlady and member Sis Cheah got elated as she bought the car number in the local 4 digit lottery and won RM5,800! She paid tithing out of that and rewarded my companion and I with RM100 each! What luck we brought to her! Then we had another lucky incident or could it be more than just luck? We had driven the car to Singapore for our Zone Conference missionary meeting. We were leaving back for KL on Monday 24th Nov just after lunch and I now quote my journal for that day :

“We had a prayer in the car for safety and ease in getting through customs. Well we did get across customs without any hassle despite the goods we had purchased in the car. We had left quite late in the afternoon, about 3pm. We switched drivers at Batu Pahat and Elder Soon had to drive for most parts in the dark. He has not as much driving experience as I have but was a pretty capable driver. The roads were windy and we were slowed down by numerous trucks or lorries. Our car is only 1100cc. Escort and overtaking is some times quite hazardous because of the lack of power in making a fast overtake.

On this occasion, I was talking to Elder Soon who was driving and we were behind semi-trailer. It was a wide bend and we couldn’t see any on coming car but Elder Soon decided to pass the trailer and we were caught beside it as another oncoming truck approached us. It was a long trailer and we didn’t have time or power to go infront of it, neither could we pull behind it as we were too far infront on its side. The truck was coming straight towards us and neither stopped or pulled off to the road side. We were cornered but in a split second, as I saw the semi-trailer accelerate beside me on the left, I yelled “Now!” and Elder Soon pulled the car to the left and we were just inches behind the semi-trailer as the other truck whisked past us! There was not time to think and our simultaneous split second decision saved our lives or prevented what could have been a most disastrous accident. It all happened so quickly that we did not have time to be panicky.

For a few minutes, neither of us made any remarks. Then Elder Soon asked if my heart was pumping extra hard moments ago and I said yes. We verbally thanked God for saving us and also decided not to inform our mission president about this close call! Otherwise we would definitely be grounded for good and we need the car badly in KL to speed up our work.” 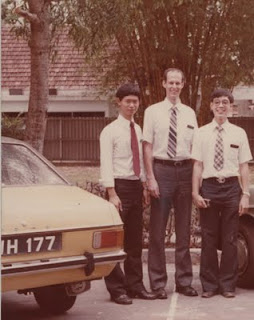 The yellow Ford Escort with number plates WH177 parked at the Singapore Bukit Timah Chapel with Elders Pang and Lecheminant beside me. They were from our small group of missionary Elders serving in the Singapore Mission under President Talmage Jones seen partly hidden in on the right back row below: 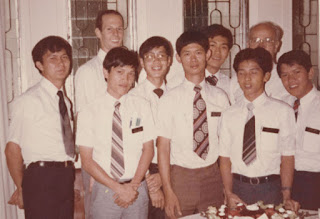 Postdated comments on 4 June 2020 about my near death experiences on the road are found here.