Call for more missionaries to serve in Malaysia

It has been just about over a year since I arrived in Singapore from the New Zealand Missionary Training Center on 15th Aug 1980. Working primarily with my Malaysian companion David Soon as the only pair of local elders serving in the country at that time, with the American couple missionary living in the PJ Mission home, the Mission President was trying to find more missionaries who can work and stay in Malaysia. Missionary couples were the first official representatives of the Church sent to Malaysia starting with Elder & Sister Werner Kiepe (1978-80). On our first arrival in Kuala Lumpur, we worked with Elder & Sister J. Floyd Stoker (1980-81) and later Elder & Sister Ralph T. Cannon (1981-82) 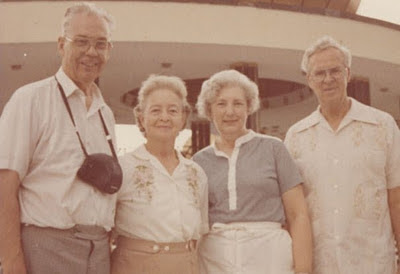 Floyd and Edna Stoker on the left and Ruth and Ralph Cannon on the right taken in the short transition period before the Stokers returned to their home in Salt Lake City. 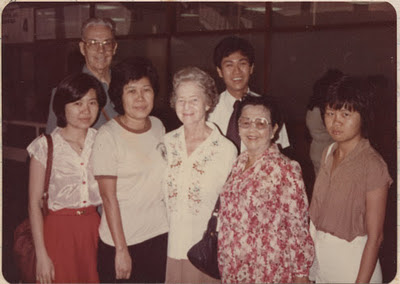 At the airport on 1 May 1981 to bid farewell to the Stokers. The sisters in the front row from left to right are : Hoe Siew Yin, her older sister Susan, Edna Stoker, my mother Cheah Kooi Sim baptized by Elder Stoker and Jackie Ho, another pioneer member who has contributed pioneer photos of the KL group found here. In the back is Floyd Stoker and David Soon on the right.

Prior to this we had temporary splits that we made when missionaries from Singapore were sent to Malaysia so that we could pair off to serve in different cities in our new companionships. These exchanges however were short lived due to visa restrictions and problems of renewal to stay for a longer period of time. There had to be a better solution in the long term. Missionaries with a British passport from a Commonwealth country were thought of to be a possible solution and so the first pair of Chinese Elders from Hong Kong were sent to Malaysia. They were Elder Yung Yik Kwong and Elder Wu Yuk Choy who arrived in Singapore on the evening of 1 Sep 1981. 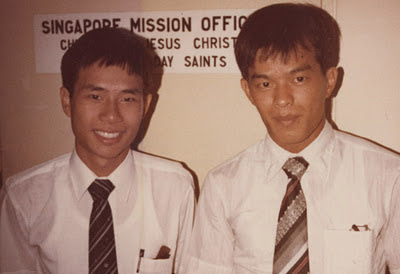 At a District Development Meeting (DDM) of missionaries in Singapore, President Talmage Jones briefed us about the pair of new missionaries and assigned us responsibilities in training them during their 10 day stay in Singapore. They were to follow us back to Malaysia after a zone conference which was set on 12th Sep in Singapore. 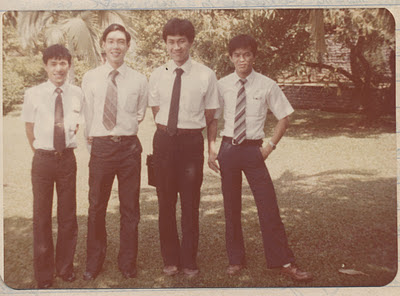 
A similar experiment was carried out when a local Malaysian member Hoe Siew Yin, a younger sister of Ivan Ho in Kuala Lumpur who introduced her to the Church after returning home as a member in Taiwan, decided to go on a voluntary mission for the Church. She was to report to the Singapore Mission office on 30th Oct 1981. She was a pioneer member of the Church baptized on 2 July 1977 in Kuala Lumpur when the Church primarily consisted of expatriates meeting as a group. A Sister Emime Woo(Ho), from Hong Kong was arranged to be sent to Singapore before end of October '81. 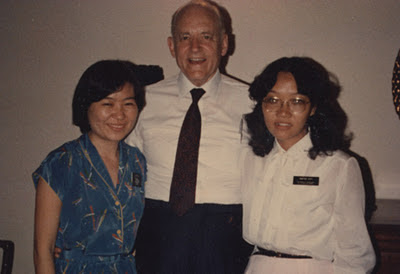 Seen in this photo is President Howard W. Hunter when he was in Singapore on 8 Nov 1981 as an apostle with a special evening meeting with all the missionaries at the Mission home at 42 Jalan Chee Hoon Avenue. On the left is Sister Hoe and right Sister Woo. 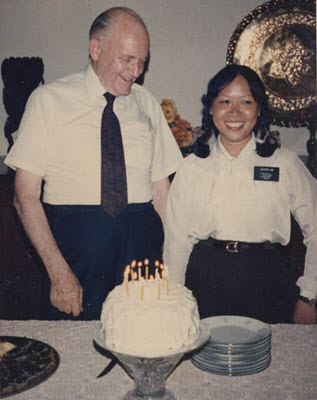 As we were making good progress with missionary work in Ipoh, President Jones was also preparing for a Canadian couple to serve there when a branch could be created. This occurred in 10 Jan 1982. 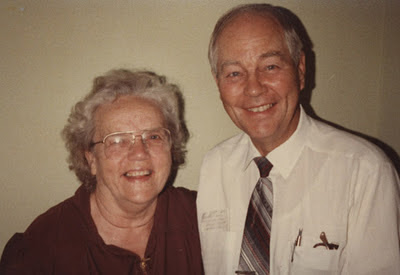 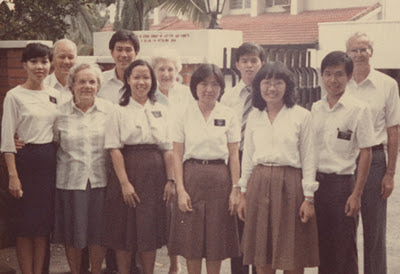 Seen here, we have the full missionary force in Malaysia together as at 18 Jan 1982 in front of the PJ Mission Home at 3 Jalan Mentri Utara 7/4, with the exception me the camera man. There would be a total of 12 of us. It had the addition of 2 sisters from Singapore, Sis Hazel Tang(Tan) on the far left and Catherine Lim(Wong) 3rd from the left in front, to do splits with Sis Hoe in the center and Woo, 2nd from right in the front. Sis Tang and Woo would proceed to Ipoh the next day with the Redds, couple on the far left, while Sisters Catherine Lim and Hoe would remain in PJ. I had switched my companion to Elder Wu, 2nd from the right in the back row, after returning from Ipoh to remain in KL while my previous companion Elder Yung, on the far right in the front, would follow Elder Soon, 2nd from the left in the back, to be in Penang Branch. Elder Cannon who was also called as the Malaysia District President, on the far right in the back, with his wife at the back center were the couple missionary based in PJ staying at the mission home.

Having foreign missionaries with only limited duration in their visas with the uncertainty of renewals even with Commonwealth passports as was discovered, created quite a challenge for the Mission President who had to juggle missionaries around not only between Malaysia and Singapore but with other countries as well that became part of the Singapore Mission when local problems for Church administration were encountered in those countries. This included countries such as Indonesia, India, Sri Lanka and Pakistan.

Having local missionaries was a key to help the Church be established quickly especially in its early years. I now know that the Lord has a hand in calling such pioneer missionaries to serve as I and my companion David Soon had became aware of in our first meeting together in Singapore. I also know that the Lord ingeniously also places foreign missionaries and expatriate members to help developing areas of the Church despite obstacles that may be placed for the restored gospel to be established. From just the band of total 12 missionaries that worked in Malaysia during my time, the missionary force has increase significantly in Malaysia as many more accept the call to serve as a full time missionary.

It is my testimony that the Lord Jesus Christ is the head of this Church and has a personal hand in leading its growth and direction through continuous revelation to man on earth today. I was privileged to have received such an unexpected and powerful personal revelation in my life. I hope everyone who has received the call to serve a full time mission will chose to serve faithfully and enjoy the strong spirit during and after the mission that is possible. It just takes faith and commitment to true principles.


us visa renewalGet Your visa renewal done in less than 3 hours from the time you make your embassy payment. payment after processing your application. we deal with american USA visa renewal services in India mainly in Hyderabad Delhi Mumbai Chennai kolkata.