Placing the Book of Mormon in Bookstores

Due to the many miracles and prompting of the spirit that I had thus far received since I was first impressed to serve a mission, my mind has constantly been trying to figure out the most effective way in using my time and reaching out to as many people as possible.

In this respect, I like to relate what is recorded on Day 92 of my mission journal :

“For the rest of the afternoon, we were to visit the bookstores in KL to promote the Book of Mormon. We have made about 13 plastic display boards to be given to the stores to publicize the book but in the first two stores we tried in PJ, they only took the books but refused the boards. Now I felt quite disappointed with the early results and knew that I had to have greater faith and needed to pray hard. I have been praying for some time and just before we left the mission home, I offered the companionship prayer and again pleaded to our Heavenly Father to help us be successful. I was specific in my prayers about the plastic display boards, saying it was prepared with much effort under the Lord’s guidance and hoped it would be acceptable to the stores. So we got to KL and Lo and Behold, the books and board was accepted by the first store we visited without any difficulty. We tried the next store nearby but they weren’t interested. Then we tried all the big shopping complexes like Weld, Fitzpatrick supermarkets and Sungei Wang Plaza and they all accepted our presentation! It only took about 5 minutes each time for them to accept the deal and we were elated. How thankful I was to our Heavenly Father!”

The Book of Mormon plastic display boards had the attention grabbing title of “Ancient America Speaks” with a copy of the Book of Mormon on it. Below it were flyers that were available from the Church with the same theme of Ancient America Speaks. We stamped the books and flyers with our Church address and contact number. On certain days we would visit the store and waited for someone to pay attention to the display board. Two leaders of the Church today, Bro Wong Yut Weng and Felix Yong Yoke Choy were street contacts I had made through this project . Another new member who had joined the Church in New Zealand but couldn’t find our Church when he came home got to find the Church from our contact number stamped in the Book of Mormon. His name is David Ching. 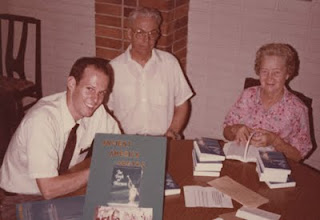