This weekend I am in Malaysia where Friday is not a public holiday like in Singapore for the Easter celebration. 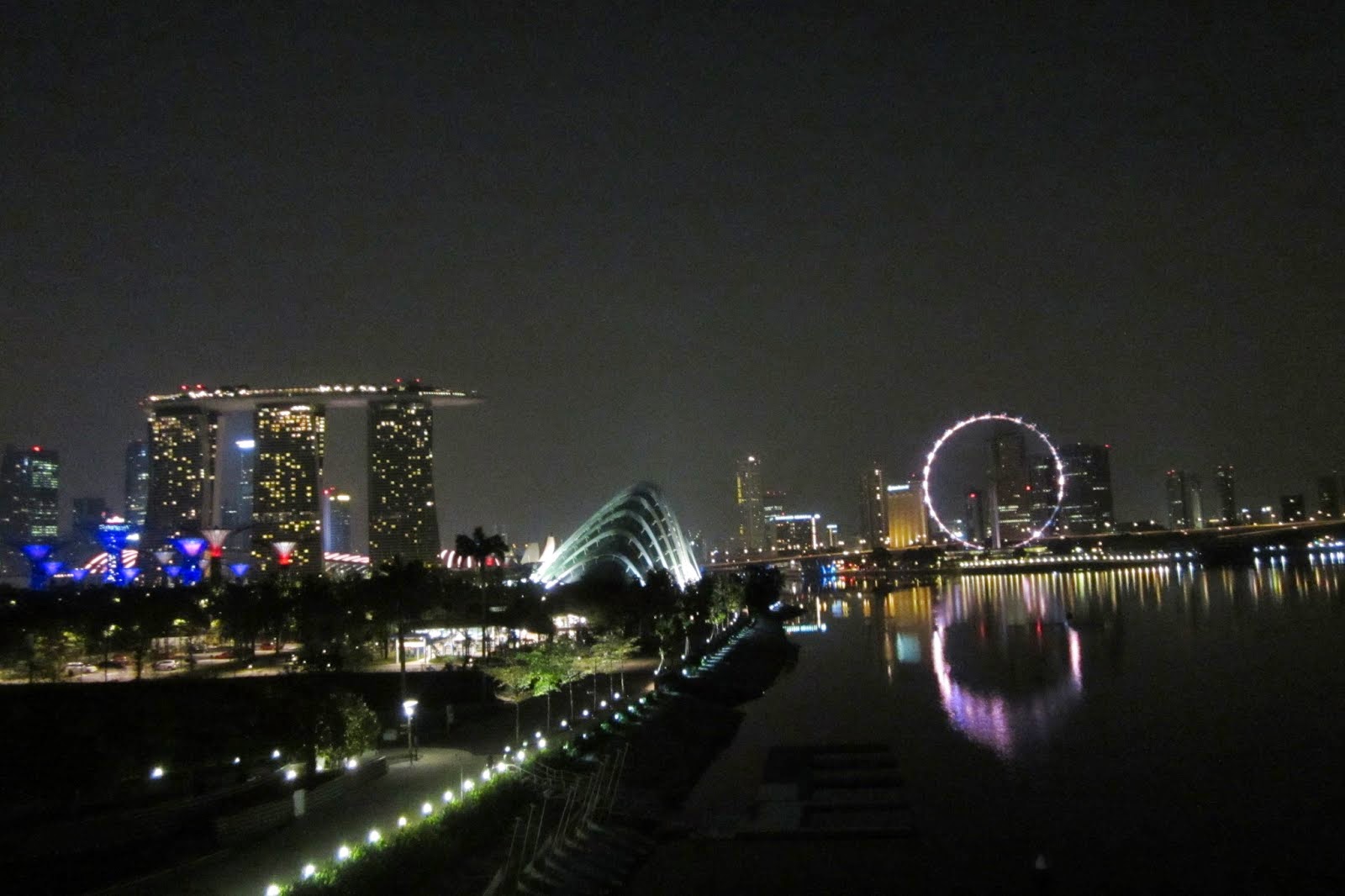 I remember last year on this same season, I was in Singapore and there were some memorable spiritual activities and thoughts that I had which I had shared in this blog post. 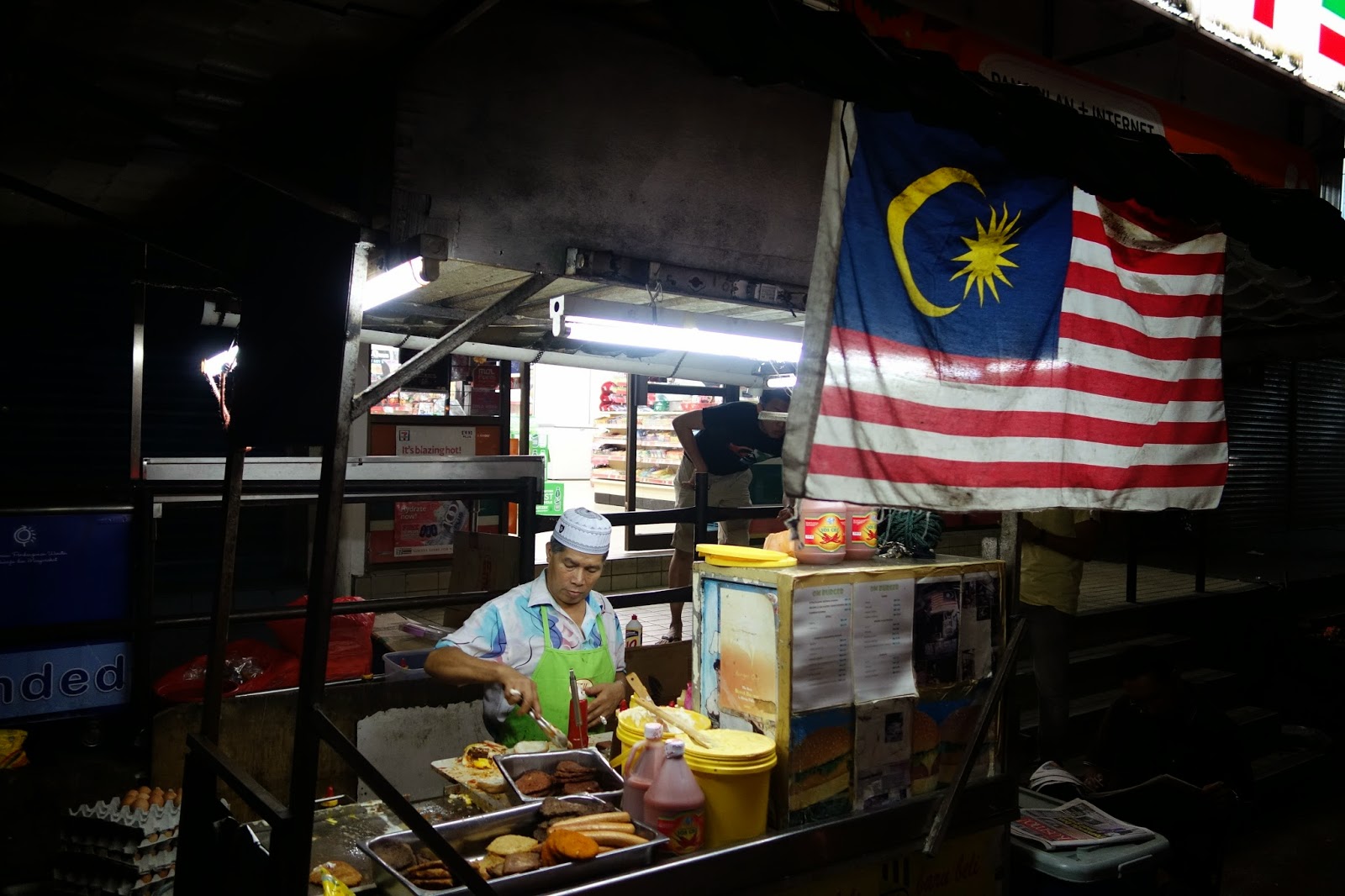 As I am in Malaysia with less signs of any Easter spirit, I nevertheless felt I could perhaps create some on my own. I thought feelings of nostalgia might help. I went to visit our old neighborhood in Ampang that brought back fond memories of over 30 years to the time I first started to raise my own family following a Christian faith. I met the Ramly burger stall owner, my good friend, who became a father of 8 children. I had seen him and his wife, during the nights when they usually operate, with their new baby tucked at times comfortably under their wooden stall then as they kept busy serving customers! I also witnessed when the babies grew up,  their older daughters would also be helping out at the stall. Yes to me these are more than just the usual food memories that we have in Malaysia and here is a video I made on the night before Easter Friday to capture the moments of reminiscing! Oh I mustn't forget to mention the delicious 'Satay' too that turned the intended snack into a late dinner :

An appreciation of the significance or meaning of Easter in a country where Christians are a minority in a predominantly Muslim nation is not something that will come naturally. Having said that, as a Mormon with a belief in modern revelation that restored many truths to the world again, I am appreciative that even many who are Christians may not know that the real sacrifice of Jesus was not the pains he bore on the cross. This misguided belief may have come about with the idolization of the cross itself by a majority of the Christian world to overshadow the atonement event in the Garden of Gethsemane where the pains for suffering the sins of the world was so great that Jesus bled in every pore.  (D&C 19:16, 18.)

Maybe I'm one too detailed or exact to point out such details just as I did on last year's Easter on a different topic. On the suffering and sacrifice of Jesus, my logic will always quickly kick in to point out that many other thieves or outcasts of the Roman empire would likewise be tortured on the cross and they certainly do not qualify to be the Savior of the world. I have long reasoned out that it is probably a habit of the human mind to want to simplify everything so using a cross or object for one to pray to divinity would be more helpful for its followers. Yet in the basic Ten commandments given  to the prophet Moses for his people, the second commandment states, 'Thou shall not make unto thee any graven image' or in other versions, 'Thou shall bring no false idols before me.'

There are obvious reasons to simplify all complexed details for an easier understanding and assimilation of any important theory or principle. It appears that original stories and even truths through time become shortened or simplified. There is a trend in the world that says "Less is More" but I believe it does not mean we do away with the details but that there is a need to simplify our presentation so that it does not cause others to fall asleep or be turned off due to intricate complexities. Christ himself was a master teacher who knew how to simplify as he had summarized all the 10 commandments to two ie. The first great commandment being, 'Thou shalt love the Lord thy God with all thy heart, and with all thy soul and with all thy mind. The second he said was like unto the first, 'Thou shalt love thy fellowmen as thyself.'
(Matt. 22:37–40) 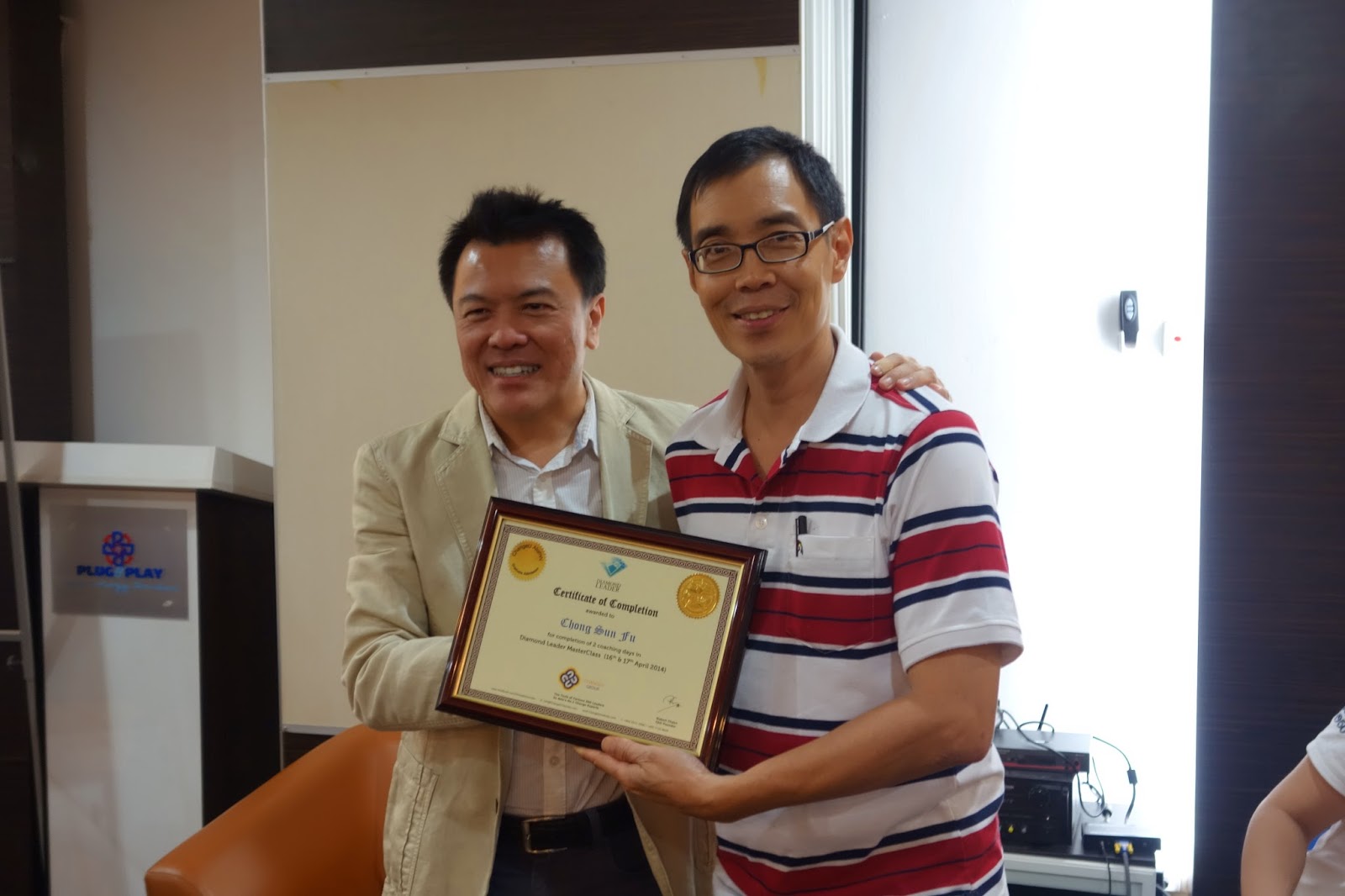 On the eve of Easter Friday was the second and final day of a coaching program I had attended led by Robert Chaen whom I had got to know by what I believe to be some divine intervention to create spiritual moments for both of us as recorded in my blog post as well as his. This was his signature program known as the Diamond Leader Master Class and he did a very good job to connect the group together with him and the principles involved in leadership. 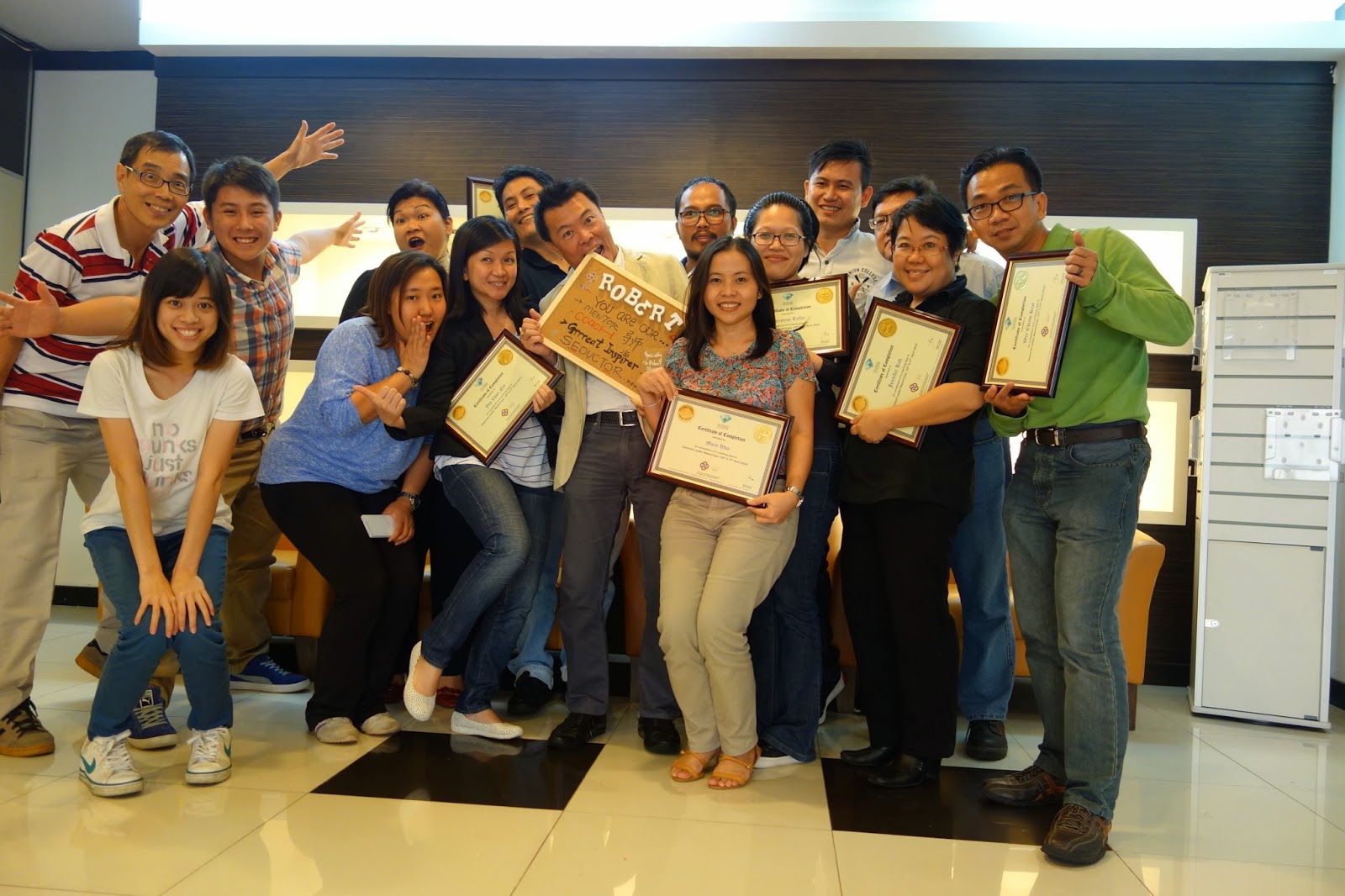 He knew of my thirst for details and highlighted "Less is More" to me so when it came to my part to represent my group to report our discussion, I could do it without speaking a word by using body language and gestures only which also brought laughter to everyone. This has been posted in my facebook timeline :


As Easter Friday was not a public holiday in KL, I spent the time working and running around the city. Perhaps looking for more inspiration for this Easter weekend, I decided to go to the bookstore to shop for the latest books! Here are a couple of books I like to highlight after a quick read through : 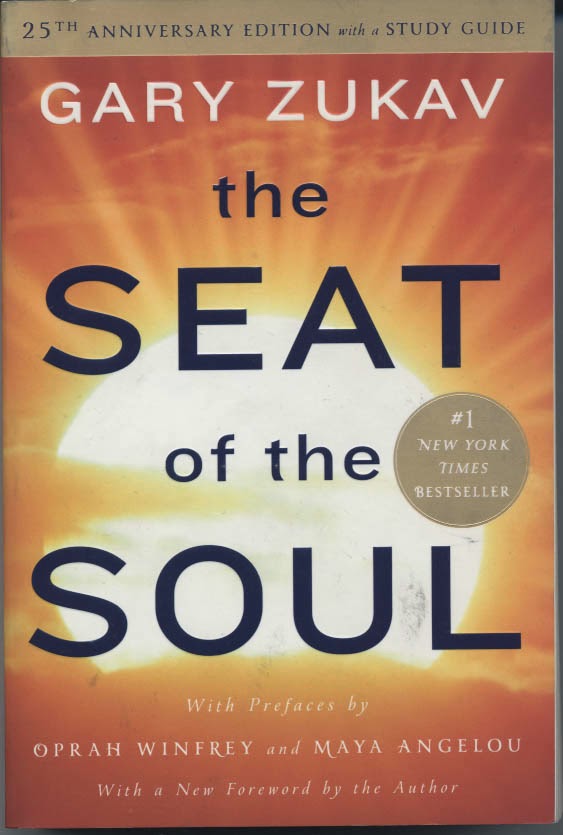 Aside from organized religion, personal spirituality is a growing trend in the world. Gary Zukav is one writer who can perhaps meet the desire of many seeking for spiritual peace without a need to believe in any deity. A philosopher of America with the a foundation of science, he will use vocabulary such as human evolution, authentic power and Karma with different emphasis from their original context. I like his unique reference to the 'five-sensory human' that only uses our basic 5 senses to perceive things compared to the 'multi-sensory human' that uses very much more.

Gary, considered a Spiritualist, is very articulate in his English language to explain cause and effect as follows in page 23 of his book : Every action, thought and feeling is motivated by an intention, and that intention is a cause that exist as one with an effect. If we participate in the cause, it is not possible for us not to participate in the effect. In this most profound way, we are held responsible for our every action, thought, and feeling, which is to say, for our every intention. We ourselves, shall partake of the fruit of our every intention. It is, therefore, wise for us to become aware of the many intentions that inform our experience, to sort out which intentions produce which effects, and to choose our intentions according to the effects that we desire to produce.

We can hear him speak with his articulate spiritual terminologies by watching the video below: 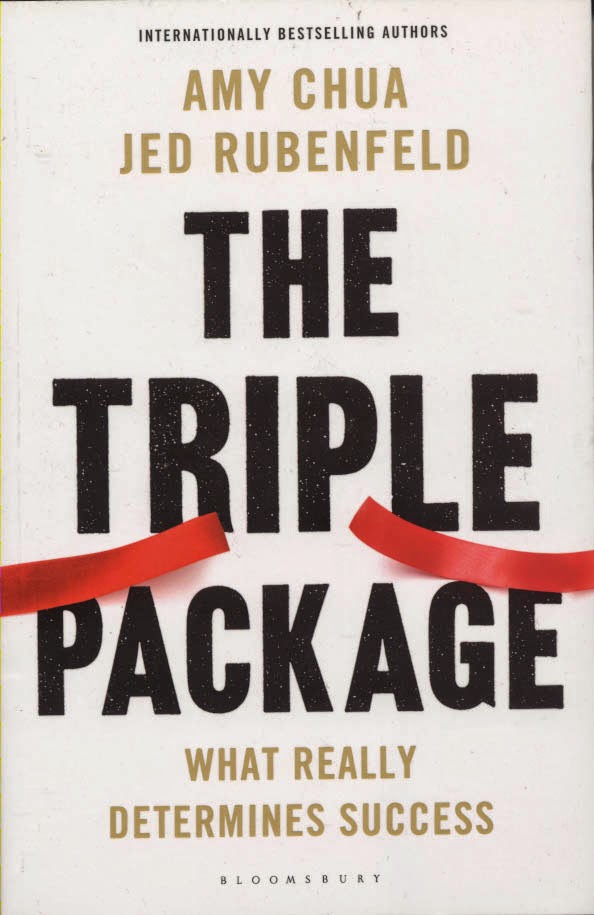 Amy Chua, now renown as the Tiger-Mom co-writes her latest book with her Jewish husband Jed Rubenfeld that boldly makes claim why certain groups or culture become more successful than others, naming Jews and Mormons as one of the named superiority groups with their reasonings.

Listen to what Jed and Amy have to share about their book that has become controversial since its release. Watch the videos below :


The video below is not about her book but Amy Chuah was invited to participate in a debate about whether Asian parenting way is better than the way of the West :

For the Easter weekend, I decided to cook for the pair of twins, Caryn and Coryn, who were part of the story of last year's Easter weekend in Singapore referenced by the first web link given at the start of this post. They just adopted a cute male poodle who became the special guest and highlight of our photos for the evening that were posted in facebook :

Good food, good friends with their poodle (over, lol) for dinner on Easter Weekend all #becauseofhim Continuing story...
Posted by Sun Fu Chong on Saturday, April 19, 2014


I posted a video on facebook which I consider is in line with the concept of' "Less is More", adding the hash tag #BecauseOfHim :