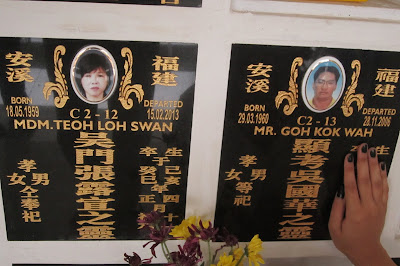 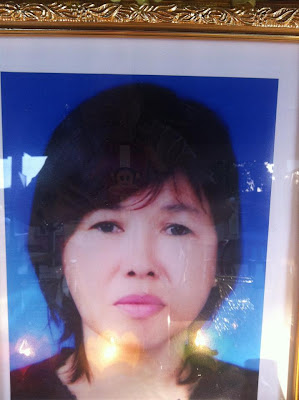 It is note worthy that Lucy's husband, Goh Kok Wah, who was called as the first branch president on 15 Dec 1996 did not have a counselor until early 1998 when Brother Rogelio Abiera (Roger) was called as his 1st counsellor. He had effectively served alone for a little over a year as the Branch President. His name is listed in a Malaysia Church history document below that is dated July 2011 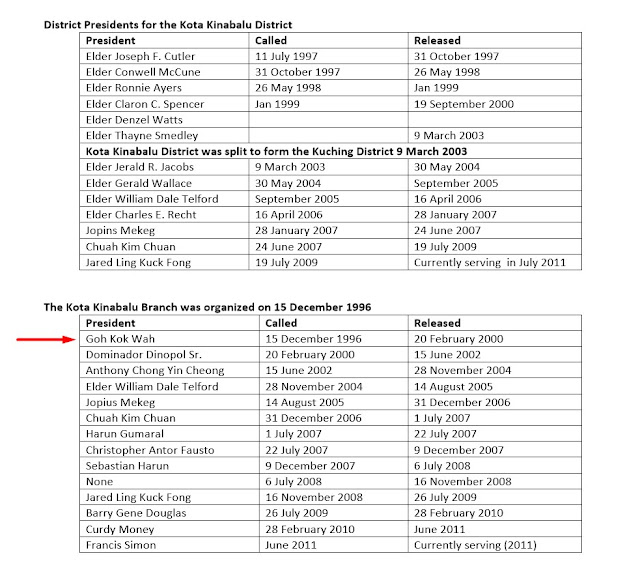 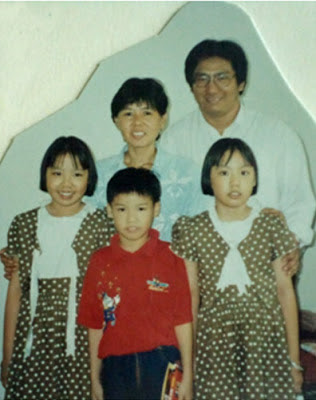 Teoh Loh Swan(Lucy) and her husband Goh Kok Wah in the back  with children in front from left to right, Caryn Goh, Darren Goh and Coryn Goh. The photo was taken on the baptism day of President Goh on 14 Dec 1996. 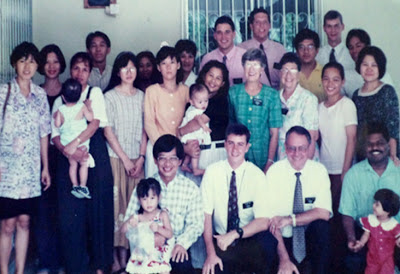 Lucy is seen on the left in a branch meeting on 21 April 1996 that had a record attendance!


President Goh and his wife Lucy loved the many missionaries that had come to serve in Kota Kinabalu and many shared their fond memories of Lucy in her autograph books shared by her daughter Caryn Goh : 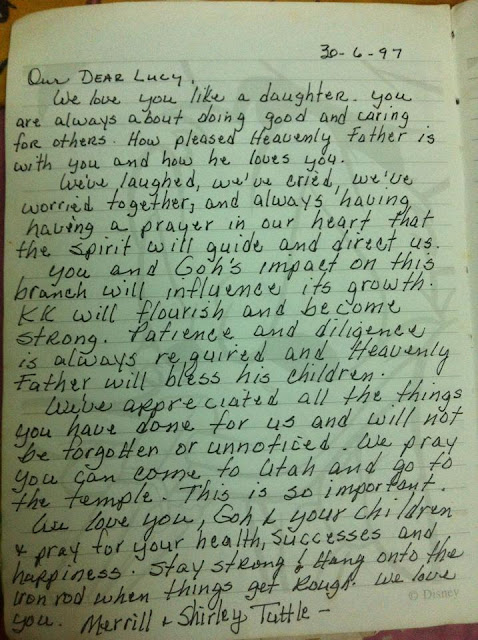 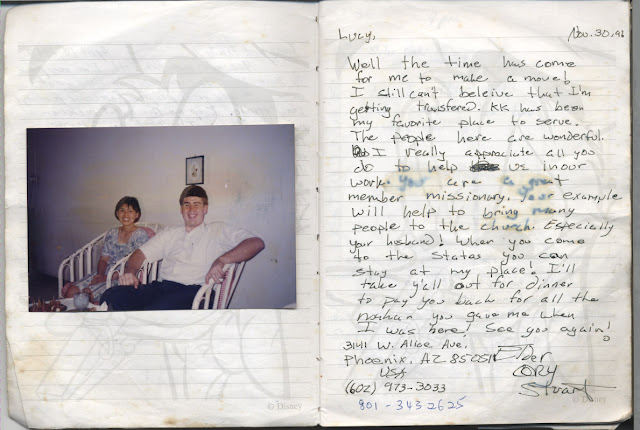 Click the photo to enlarge it to read the writings of Elder Cory Stuart on the right page. 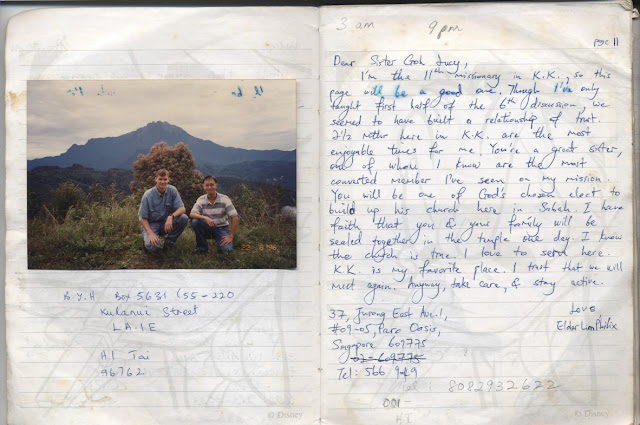 Click the photo to enlarge it to read the writings of Elder Philix Lim on the right page. 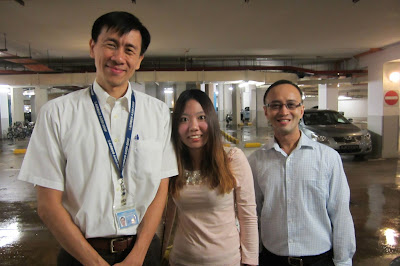 The reunion of Elder Philix Lim (on the right) with another Singapore Elder named James Png (on the left) with one of the twin daughters of Lucy named Caryn (in the middle) on Easter Sunday of 2013, 17 years later, is shared on the blog post found here. 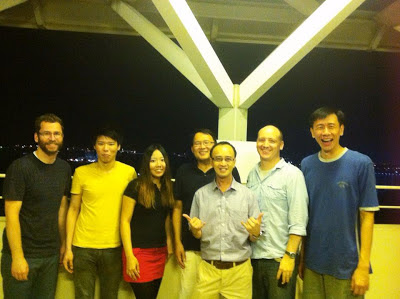 A reunion of missionaries in Singapore on 1 July 2013 who served in KK Sabah in the years 1996 to 2000 with Caryn Goh and her brother Darren Goh beside her. In 1996 Caryn and her twin sister Coryn were only 9 years old and Darren 7. The returned missionaries from left to right are Brant Vest, Jeffery Siah, Philix Lim, Luke Milburn and James Png. 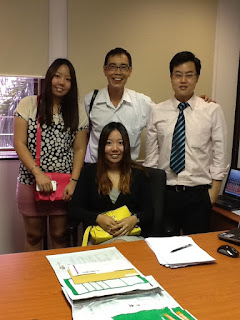 I brought the two adult twin sisters(L-R Coryn and Caryn) to our PJ Church office of Bro Ernest Tan.

More pages of the missionaries who wrote on Lucy Goh's family autograph book : 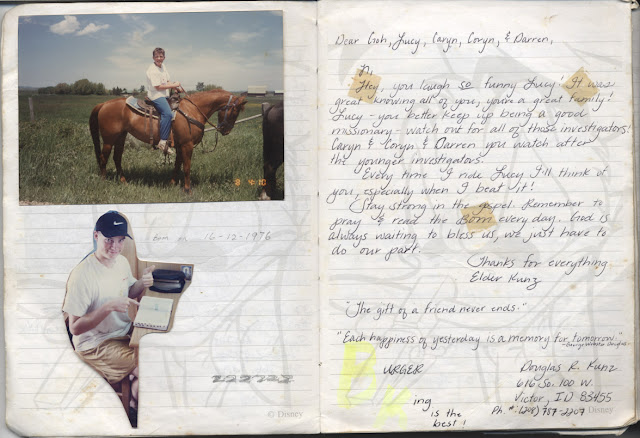 Click the photo to enlarge it to read the writings of Elder Douglas Kunz on the right page. 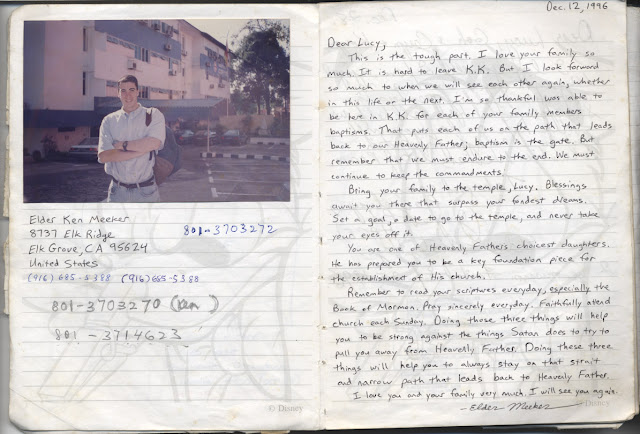 Click the photo to enlarge it to read the writings of Elder Ken Meeker on the right page. 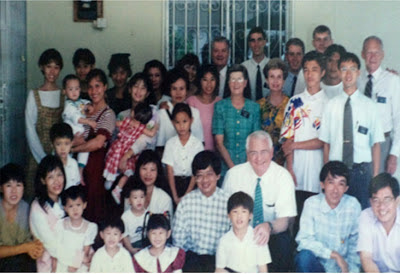 Sacrament meeting in KK on 1 Sep 1996 with the Mission President Carl D. Warren in the front and his wife Laura Warren behind him. In the center behind is Elder John H. Groberg of the Quorum of Seventy. 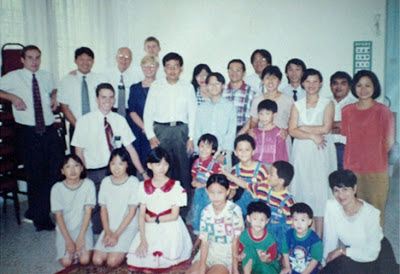 Sacrament meeting on 21 Dec 1997 with presence of the new Mission President Nicholas P Collins and his wife.

The Goh family in the end of the year 2000 had moved to Alor Setar in the northern state of Kedah in West Malaysia. Sadly Pres Goh passed away in his hometown on 28 Nov 2006 due to illness. This left Lucy as a widow taking care of their three children until she herself passed away due to cancer on 15 Feb 2013 to be reunited with her husband.


The above video was first extracted from an old mouldy video tape to a modern DVD on the initiative of the love of his daughter Caryn Goh.

Strangely in going through her father's belonging one day after she came to live with her sister in PJ, Caryn told me she discovered his old pocket notebook that had a page with my full name written on it seen below! 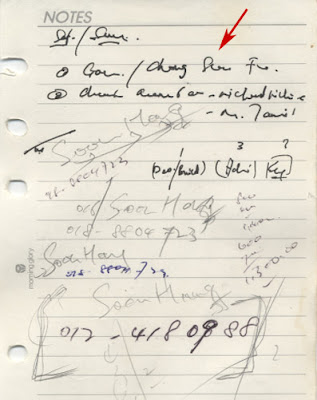 This piece of evidence made me recall back to the year of 1997 when I did meet a man who came to our Church in KL who said he was a member visiting from Kota Kinabalu.  He was a very quiet humble man who never told me he was the Branch President in Kota Kinabalu but in our conversation, I did find out that he was a land surveyor. I told him my father was also a land surveyor and if he was interested, he could contact me so that I can arrange a meeting with my father for him. I did give him my phone number and he must have noted my name in his notebook but he never called me back to arrange a meeting, nor did I ever meet him again! I forgot about the whole incident until Caryn showed me the above image of his noteboook! What a wonderful surprise I felt of this whole incident but I knew this was just another sign for me in my life, just like the many other signs or miracles that I have been blessed to receive during my lifetime. I have done my best to record them in this Spiritlane journal with a special introductory post that begins here.

Caryn had found the Returned Missionary facebook group page for those who had served a mission in Malaysia. She felt a desire to once again connect to the missionaries who knew her family when they served in KK, especially Elder Meeker who baptized her when she was very young. Caryn was emotionally attached to her mother to the last days of her life as she had stopped her part time work and studies in KL to return home to Kedah to care for her mother. She felt the pains of her mother over the period of 6 months caring for Lucy in and out of hospital.  In the last few days of Lucy's life, she asked to celebrate the birthday of the twin girls a week earlier in February from their birthday on the 15 th which they did. Exactly a week later on Feb 15 she passed away peacefully on their birthday! 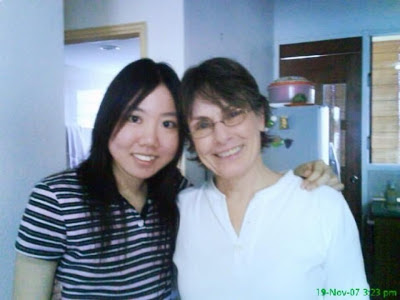 In the photo is Caryn with Sis Loraine Timothy in Penang in 2007 who with her husband were serving as a couple missionary at that time. Sis Timothy through communication with Caryn through facebook greatly assisted her to finally find Elder Meeker who wrote the following to Caryn through his wife's facebook account : 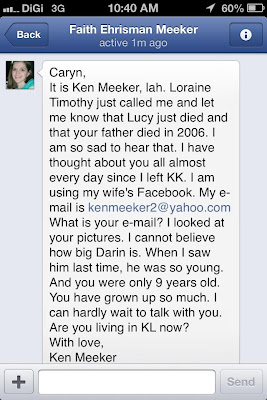 This blog post acknowledges the hands of our Heavenly Father to connect his children to help one another and provide comfort for those who specially need it. Lucy Goh had a great love for the restored gospel and took care of the Lord's missionaries with exceptional love and devotion. It is hoped that this simple blog post allows all its readers to know what a great daughter of God Lucy was who made a difference to many through her quiet and unassuming ways and will never be forgotten. Click here to know how the internet was used to help the children connect back to the missionaries who taught the family the Gospel.

The following video is dedicated to Lucy Goh and her daughters :

The quotation from Ecclesiastes 3: 1-8 is appropriately shared here :

All the Church members in Singapore and Malaysia were overjoyed with the latest news of the Church conference broadcast over the internet. Many members who lived as expatriates in Singapore and Malaysia previously, including many who have served as a missionary in the Singapore mission were very happy too as expressed in FaceBook and other social media! Later in the week I received the following message on my phone from Caryn: 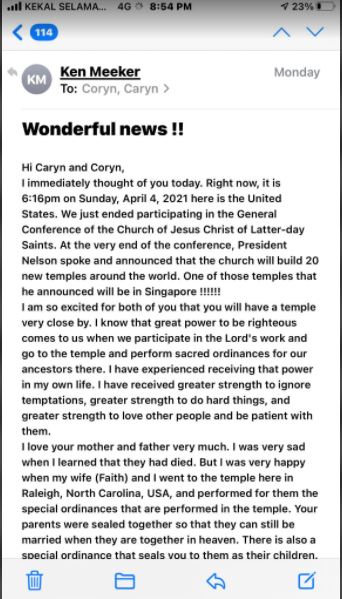 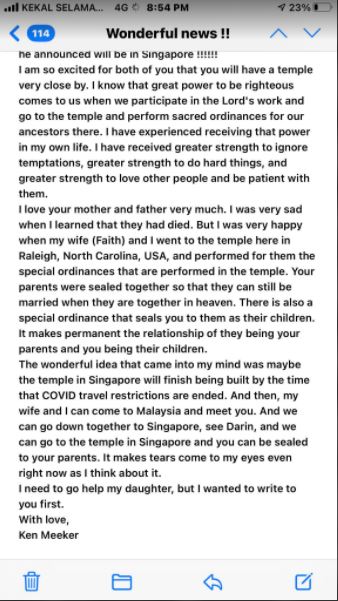 Wow...this was the same Ken Meeker who was looking for Caryn and her sister Coryn as per the story on this post! My tears flow again as when I first caught the news online and shared it to everyone on Facebook with a link to my journal here.
12 April 2021
Sad news of the passing of the grandmother of Caryn and Coryn Goh

Rest in peace to my beloved grandmother, you will forever be missed..