When we live a spiritual life, we live thinking beyond the routine of daily life of chores and work for survival though they are important too. As members of the Church, the vision of the future is definitely far reaching to the extent of imagining how our posterity will cover the earth and continue to do much good in the world we live in based on the knowledge they have received from the restored Gospel known to us. Perhaps to fulfill the mission of the Church ie to Preach the Gospel, Perfect the Saints and Redeem the dead is predominant in our mind sets.

We are grateful that in our Church, there has been great programs that have prepared our children for their spiritual well being and future. In the beginning we had the Primary organization to help us which caters for children age 18 mths to 11 years of age with the following objectives :


It should be noted that as parents we take full responsibility for the physical and spiritual welfare of our children but as members of the Church we have Primary leaders and teachers to assist us. 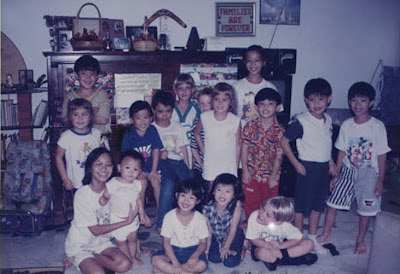 With a branch of the Church established in Kuala Lumpur, our children could grow up with children of other families under the influence of the Gospel guided by the parents and the support of the Primary organization of the Church. As parents who joined the Church only at an older age, our children received a benefit that their parents never had, that is to be brought up with a gospel environment and teachings with the support of a Primary organization.


The children grew up remembering Family Home Evenings together 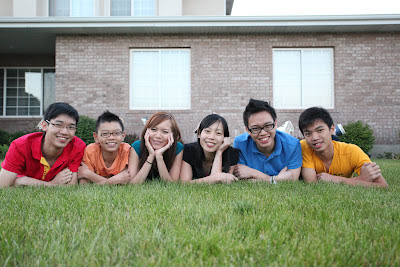 As most parents will find out, the children grow up very quickly. The Primary children turn to become young men and women. In the world, they would fall into the challenging teenage years of adolescence. In the Church, this is a time when they begin to assume roles and responsibilities as they continue to learn the Gospel with more depth through Seminary and Institute classes.

For the boys, they would want to be worthy to be conferred first the Aaronic Priesthood in the office of deacon(ages 12-13), teacher(ages 14-15) and priest (ages 16-18) to be of service to members of the Church and the community. Once over 18, the boys if worthy would be able to receive the higher Melchizedek Priesthood ordained to the office of an Elder. Many would choose to serve a 2 year mission for the Church when they are 19 years of age or older. For women, they have to be at least 21 years of age to serve as a full time missionary for the duration of 18 months. It is not compulsory for any member to serve a mission for the Church. The choice to go on a mission or whatever that is important for them in life is pretty much decided by the children themselves as per our family policy too when they are of mature and accountable age. We believe that we are to teach them correct principles but they are to govern themselves. 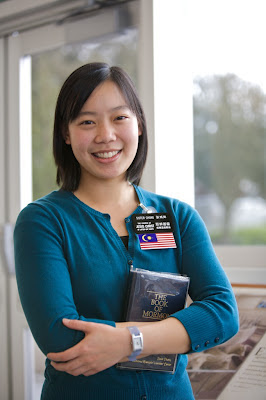 Among the children, Su was the first to go on a mission and served as a Chinese speaking Missionary in the Oakland California mission for the Church in Feb 2007 to Aug 2008. 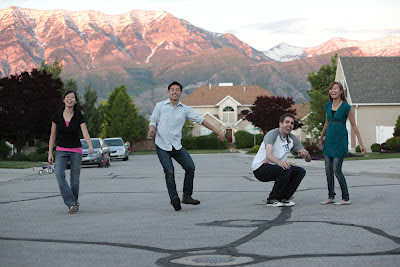 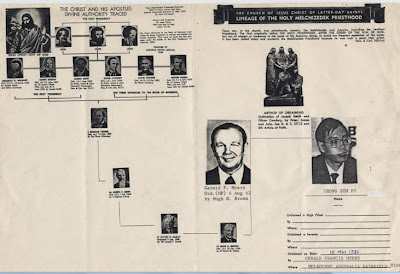 The lineage chart was given to me by President Gerald F. Myers from the Melbourne Australia Fairfield Stake who conferred the Melchizedek Priesthood to me and ordained me an Elder on 15 May 1980 in preparation for my calling to serve a mission. It shows that he had received the Priesthood from Hugh B. Brown whose lineage traces back through several modern day prophets of the Church eventually to Jesus Christ. Details of the restoration of the Melchizedek Priesthood on the earth can be read here. 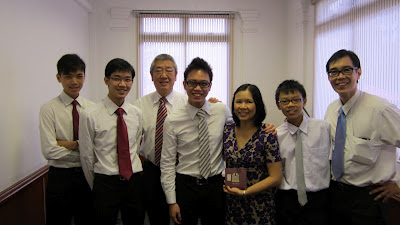 Since the base of the family moved to Singapore, the family has been blessed with being part of the Church that is an organized Stake as it would also have a Patriarch to give Patriarchal blessings to the children when they were ready. In the photo we have Patriarch Tan Su Kiong who is the Patriarch of the Stake to give those blessings, specifically on that day to our oldest Han who would be leaving on his mission soon. In Malaysia where the children were born and where the Church is only made up Districts without a stake, they would have to wait for the Patriarch to visit from Singapore if they were still in Kuala Lumpur.  Both the older boys and Su, before her mission where she was called from the Singapore Stake and returned after her mission, had received their Patriarchal blessings from Patriarch Tan. Fei received hers in BYU Hawaii when she was a student there during the time that we were visiting to witness the joy of this special event. 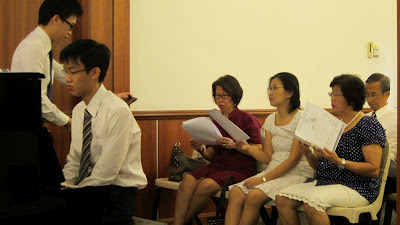 It is interesting to note that Singapore as a nation often seem to benefit from the Malaysians who move there for work etc as the island gets to reap the benefit of talents and skilled human resources who move there. In this case, the ward in Singapore gets to enjoy the musical and other talents of Han and Shuan. In the photo is Han leading the choir with Mom(a Singaporean by birth) as choir member and Shuan playing the piano. 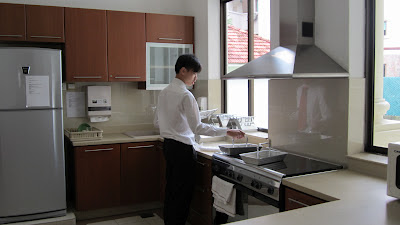 The younger boys Ern and Ray, holding the Aaronic Priesthood helps out in preparing and passing the sacrament... 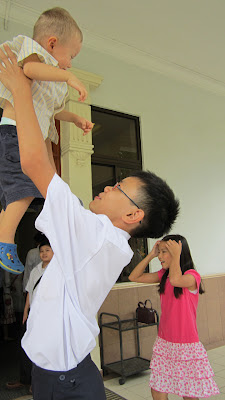 ...including baby sitting like Ray as if it was his puppy! 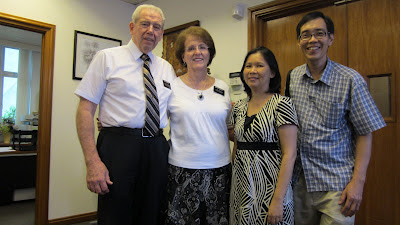 As parents, it is indeed a joy to see the Next Generation moving forward with the Gospel that we had embraced as pioneers in our own individual families first, and creating another set of pioneers who will carry it on in their own lives and their own families in the future. The photo above is at the Church Mission office with the missionary couple, Elder and Sis Garrett, who works at the office who helped us check the mail to see if the missionary calling in a mail for Han has arrived yet which it had not. It is expected to be here any day now and the whole family is anxious to know where he will be sent to.

Meanwhile, back in Malaysia, I enjoyed a youth camp of the Church led by former branch president Andy Lim who is helping the 'next generation' built a strong personal testimony of their own so that they too might have a desire to serve on a mission one day. 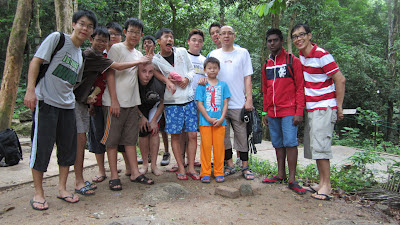 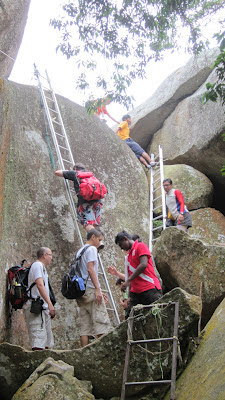 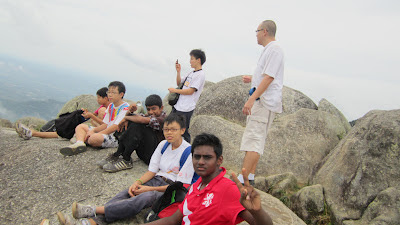 Here is the exhilarating feeling at the top 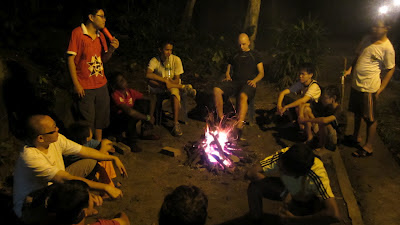 A campfire in the evening to spiritually charge up all the young campers. More photos of the youth camp are found in the facebook album here

Meanwhile, about two weeks had gone by since Mom and I had gone to the Church office to check if Han's Mission letter had arrived. A phone call to the office revealed that it had and off to the office we went. 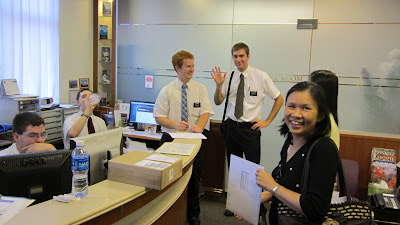 Mom's got it but we can't open it yet and so it has to be brought home for him to open it himself. This is all recorded in the video below :

(This original black screen that appears above applies to videos uploaded to facebook instead of youtube at this moment of posting. The picture thumbnail will appear only after viewing once by clicking on the black screen.) 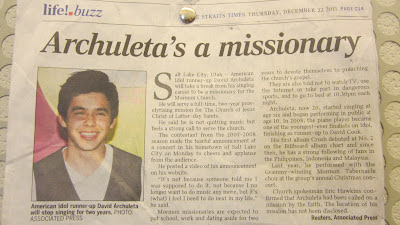 It is interesting to note that the 'Next Generation' of missionaries can include young stars from the American Idol show like Archuleta who actually visited our Clementi ward on a fast Sunday last month in February 2012. Mom happened to be at the door as he walked into the chapel in a low profile manner, caught by mom who had a brief chat with him.  A performance contract in Singapore brought him to the island. I guess where he is serving on his mission is a well kept secret!

Post dated event : Interesting that after the above newspaper cutting of Archuleta was included in this post, the family didn't expect to see Han's photo appearing in the same Straits Times paper in Singapore months later. Below is a photo of the newspaper page that appeared on 14 May 2012! 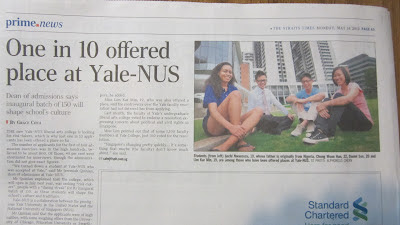 The article covered news of the progress of the admission process of the new college being established in Singapore with some interviews with students who have been offered a place. In the photo below, the last paragraph at the bottom of the extract reads, "The Malaysian citizen has been a relief teacher here since graduating in 2010. Next month, he will set off for Britain on a two-year church mission, and matriculate in 2014." 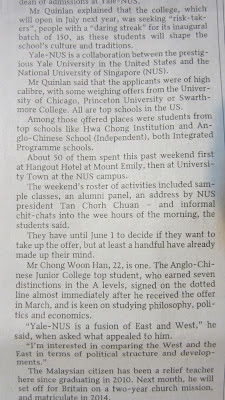 Han may not be an American Idol star but he is certainly our familylane star!

His last few hours before flying off from Changi Airport in Singapore are recorded here. 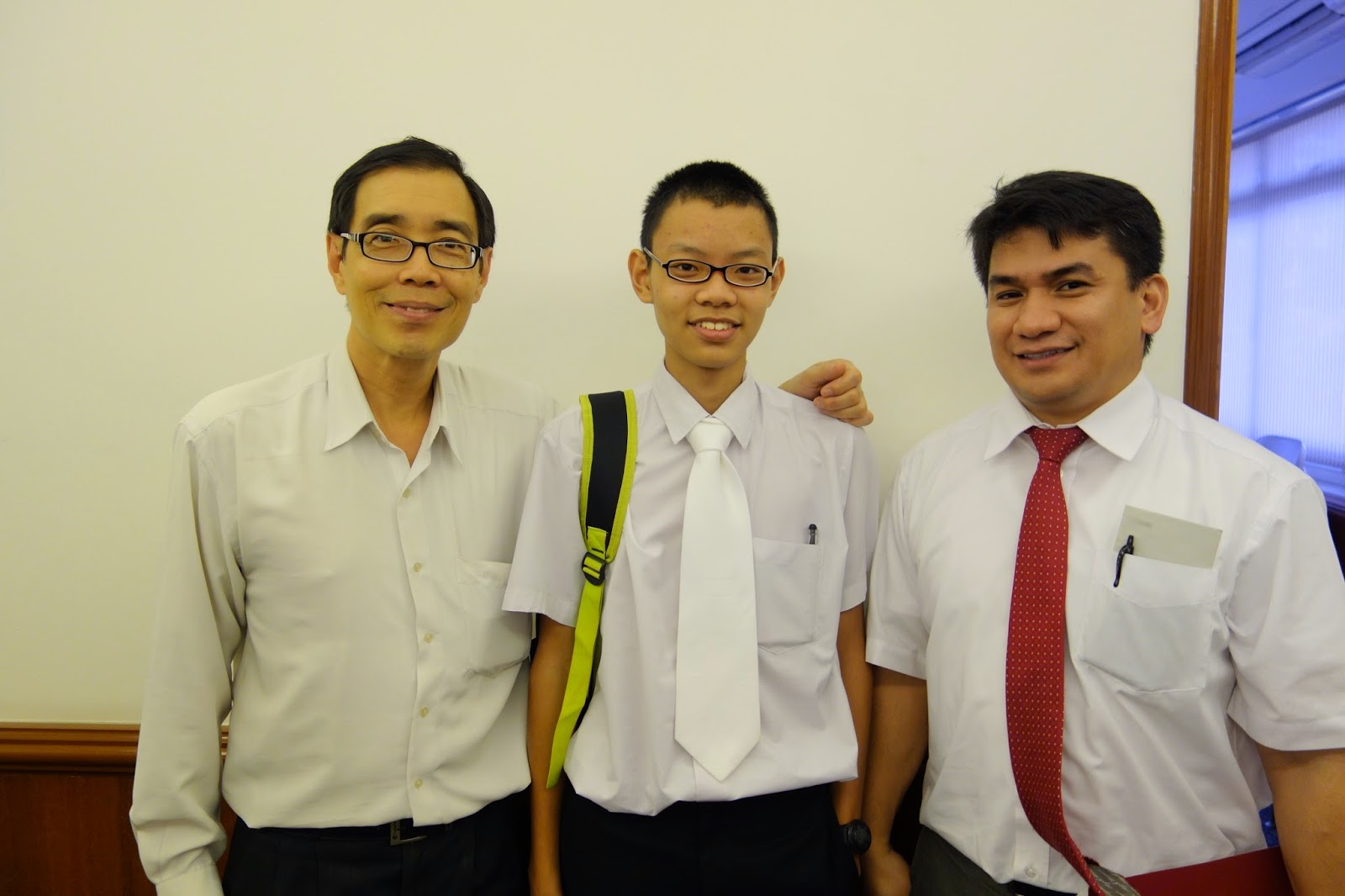 On this day of the year 2014, Ray was ordained to the office of a Priest in the Aaronic priesthood 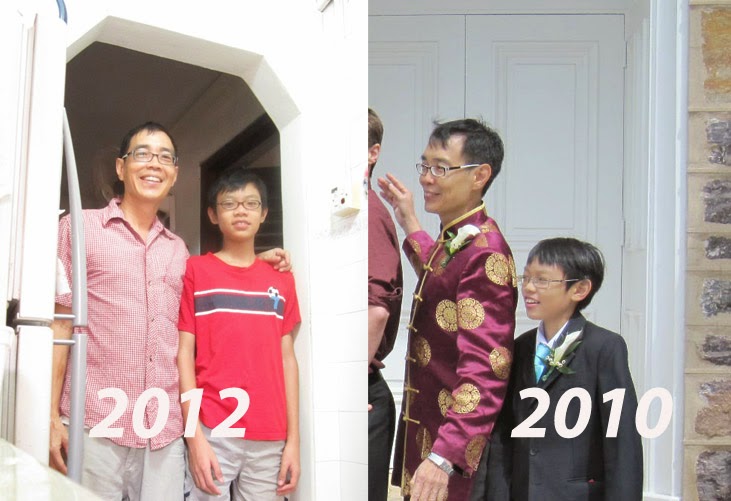 As we can see from the two pics, his progress in his priesthood commensurates with his increase in height noticeable in recent years

While serving mission is an optional choice for the boys as they grow up in age, those who moved to Singapore as a PR Permanent Resident status has a compulsory 2 year National Service enforced on them. 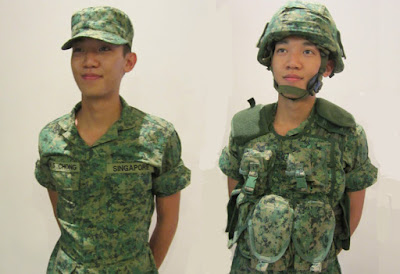 Shuan was the first that started his military service in Aug 2013 to complete by Aug 2015 as recorded here. 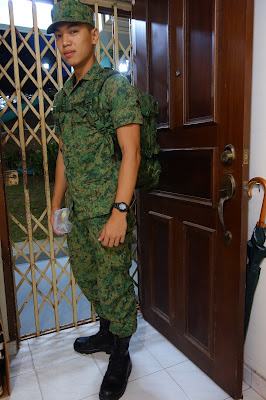 Ern was the next to follow beginning his National Service in June 2015 to be completed by June 2017 as recorded here.

In as much as military life is intensively physical by nature, modern revelation has revealed to us that “… all things unto me are spiritual, and not at any time have I given unto you a law which was temporal” (D&C 29:30–32, 34). One can read or hear the talk by President Marion G. Romney to understand this better.

Introducing Leah of the Next Next Generation! 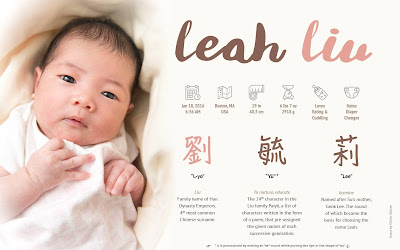 Shuan receives his mission call to serve in London England. 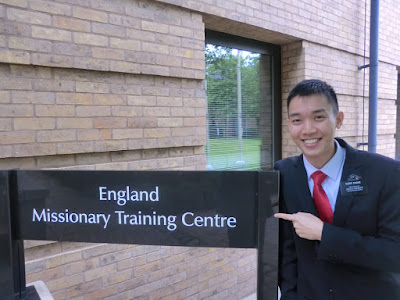 Click here for the journal post of him receiving the letter to the early morning time of departure from Singapore Changi airport to London on 6 July 2016. It also covers photos of him in the family reunion trip to the US in June like the one seen below! 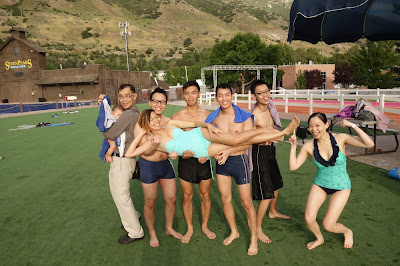 Enjoying with the next generation of brothers and sisters of the Church in Kuala Lumpur. At this time of writing on 5 October 2016, the children are spread out in Los Angeles, Boston, Singapore and London while I am in Kuala Lumpur.
To be continued later with additions or edits for computer programming problems or bugs that is not unusual working with computer algorithms that is constantly changing in our advancing next generation..... Message by an old Papa dog!
Posted by Dad the KL city kid